This article appeared in the August 2007 issue of Miranda News. It may not be reproduced without permission.

Black-billed Gulls: Another threatened species in the Firth of Thames

Several recent reviews of conservation in New Zealand wildlife have discussed Black-billed Gulls. They have been declared to be in “serious decline” by the Department of Conservation and they have found even greater fame globally now that the IUCN class them as Endangered (“at very high risk of extinction in the wild”). This is the highest threat ranking given for any of the world’s gulls. It all seems like a lot of fuss for a bird that seems reasonably common locally, turning up sooner or later on most shorebird roosts around Auckand and often scrounging outside the fish and chip shops at Kaiaua and Kawakawa Bay. Unfortunately there is good reason for this concern. In “The State of New Zealand’s Birds 2006”, a review by The Ornithological Society of New Zealand, Rachel McClellan, of Otago University, collated counts of Black-billed Gulls at breeding colonies from Southland to show an impressive population crash in recent decades. The high IUCN ranking reflects the size of this decline and the fact that it is not expected to cease in the near future but the Miranda story is a bit different.

In the North Island

In the North Island Black-billed Gulls may be relatively recent arrivals, although they had been recorded from the Rotorua Lakes in the 1800s, in 1930 Oliver recorded them only as visitors to the southern districts. This soon began to change. In 1932 they were noticed breeding in a colony with Red-billed Gulls at Rotorua and they soon increased to more than 400 active nests. When the pioneer birders began exploring Miranda they found 250 to 300 Black-billed Gulls at the mouth of the Miranda Creek on August 3rd, 1941. They found them along the Miranda coast each winter, usually in one or two big flocks. Their fortunes were well documented in the early issues of Notornis and by census counts shown in figure 1.

In those days Black-billed Gulls began to trickle in during late March, became obvious in early April, then departed between late September and early November. It was thought that the birds were coming from the Rotorua colony which had already become quite large. The pattern of occurrence in the Firth of Thames fitted in with the movement away from Rotorua which became noticeable in mid April with only a few stragglers remaining by the end of May. These stragglers remained around Rotorua over the winter until the returning flock began to appear in August with the last returning by early November. In addition a period of relatively low counts at Miranda between 1952 and 1957 matches a documented run of very poor nesting success at Rotorua up to at least 1955. This was due to a variety of causes, the harvest of eggs, disturbance by tourists entering the colony to take photographs and ‘maul’ eggs and chicks, predation and disturbance by dogs and just plain vandalism as well the floods and predators we would expect today. Through the 1940s the best winter counts at Miranda were usually up to about 300 birds but they slowly increased even though the fortunes of the source colony fluctuated. By the 1960s the main flock on the Miranda coast was usually about 850 birds and sometimes reached almost 1000 (figure 2).

At first these birds were clearly coming for the winter. The first seen to stay over the summer were two birds in the 1949-50 season but by 1960 Ross McKenzie and Dick Sibson noted that “a few could be expected in summer now”. During the 1960s as the winter flock size peaked a small summer flock became regular, usually at Kaiaua or Taramaire. Almost all of these were obviously immature and the few that appeared to be adults showed no signs of breeding. It was not until November 1967 that Dick Sibson observed indications of “a breeding urge”. The following season two adults were found sitting on their bulky nests on the shellbank at Taramaire. Unfortunately they were not successful in rearing any young but in 1969 there were three nests and the first two flying chicks were seen. With the odd setback, the colony increased after this and has nested in a number of sites around the Firth of Thames between Taramaire and Coromandel Harbour.

Around the Auckland area Black-billed Gulls were slow to spread further. Although a few Black-billed Gulls had been noticed at Clevedon and Kawakawa Bay since 1949, nesting was not observed until November 1991 at Mataitai where they now breed regularly. The earliest recorded sighting on the Manukau Harbour was a single bird reported from Clark’s Beach on November 18th 1965. There were only three or four more records of single birds until January 1989 when six were seen at Karaka. Soon small groups were being seen increasingly often and the first nests were found at Karaka in January 1994. The colony was initially successful but, after being washed out, it moved to the higher shellbanks of Clark’s Bay and they have now become regular breeders there. In the Kaipara Harbour they were equally infrequently seen until a few pairs were found breeding with White-fronted Terns and Red-billed Gulls on Rat Island in November 1993. They have become regular breeders there too, if in smaller numbers, mainly using Papakanui Spit. Over the last five years the numbers of Black-billed Gulls counted on census in the three main harbours around Auckland average 815 in summer and 524 in winter. The numbers of breeding birds varies considerably but probably at least 300 pairs make the attempt in most seasons.

These colonies are now the northernmost breeding Black-billed Gulls, but they were only part of a wider expansion in the North Island. In the 1944-5 season they were also nesting at Porangahau in Hawkes Bay and in January 1954 colonies were found at Gisborne Harbour and the Ngaruroro River mouth near Napier. At the same time as the post breeding flock from Rotorua was coming to Miranda Black-billed Gulls were also seen over the winter in the Bay of Plenty. Although the records are poorer there appear to have been just a few birds in the 1940s but a flock of 1000 was recorded at Kaituna in 1966 The spread through the North Island seems to have been accelerating at this time with breeding first noticed on Matakana Island in Tauranga Harbour in 1967, at Miranda the following year and confirmed on the Manawatu River by 1972. As in the Firth of Thames, these colonies have succeeded and further colonies have been founded around them. Although the colonies may move around locally from year to year, breeding has been recorded at least 25 sites in the North Island. These colonies are still small by South Island standards and are not all regular nesting sites but the increase in numbers and range seems to have been slow and steady in spite of setbacks.

The history of Black-billed Gulls around Auckland shown in figure 2 has been episodic and early on probably determined by fortunes of the colonies at Rotorua. It was only during the 1960s when the summer flock became regular that there was any chance for breeding to occur. Soon after this the numbers of birds wintering at Miranda fell quite quickly. A comment that the numbers of Black-billed Gulls at Whakarewarewa were “greatly reduced” supports the idea that the source colonies were not doing well at this time. During the 1980s the numbers of Black-billed Gulls in the Firth of Thames were at their lowest ebb but began to increase slowly. In the 1990s they increased faster but the pattern had changed with more birds being present in summer than winter. Not surprisingly this indicates that the population has become a local one with a breeding season peak and some winter dispersal away from the main harbours. It also suggests that the pattern of dispersal from the Rotorua colonies has changed.

This does not look like the story of a declining species but it is only a small part of the picture. In fact the current population of Black billed Gulls is not small. There appears to be 115,000 to 150,000 birds now and most of them are in the South Island.

In the South Island

Ornithological Society counts between 1995 and 1997 found about 70% of the population breeding in Southland, with perhaps 25% in Canterbury and Otago. However in the 1990s the population was already in decline. In the Southland stronghold figures analysed by Rachel McClellan show the numbers of breeding Black-billed Gulls on four key rivers plummeting from 147,000 birds in 35 colonies in 1977 to 11,000 birds in 11 colonies in 2005. This is a decline on a frightening scale – around 90% in less than 30 years. The available information from Otago and Canterbury seems little better with once great colonies reduced to tens or a few hundred birds and some have disappeared completely.

At present the reasons for this drop in numbers are not clear. It is easy to imagine threats but much harder to work out their impacts and identify their importance. Most braided river habitats in the South Island are losing breeding habitat to weeds such as gorse and broom and probably also gravel extraction. In Southland there have been big changes in land use, most notably a substantial recent increase in the number of dairy farms. The birds are also suffering from predators, like mustelids and cats, and human disturbance. Rachel McClellan has already seen an impact from predation at the breeding colonies which lowers productivity by the loss of eggs and chicks. The currently observed levels of predation, however, do not seem sufficient to cause the observed decline so other factors need to be considered too. 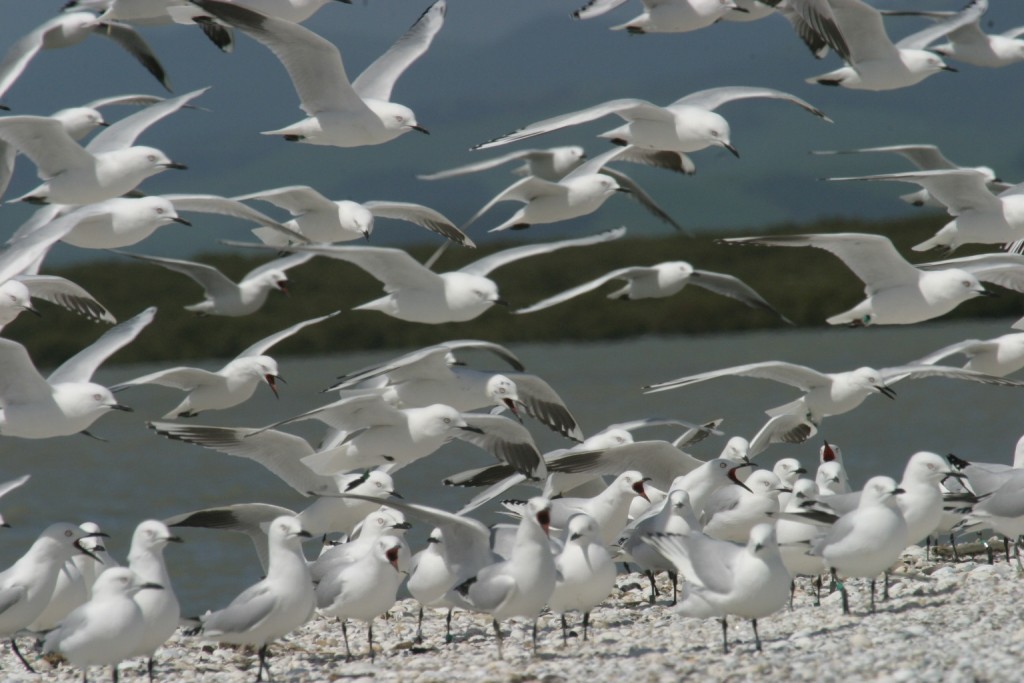 Climatic events have probably also taken a toll. During the 1990s there were unusually frequent El Nino events which led to increased rainfall and more frequent flooding events; after repeated loss of colonies to floods it was noticed that further breeding attempts could cease entirely. Pasture invertebrates are important in the diet of Black-billed Gulls but the “big freeze” in July 1996 made feeding difficult and led to increased mortality as hungry birds feeding on the roads were killed by traffic. In one case 244 road killed corpses were counted in about 30 kilometres between Winton and Invercargill. There have been other cold weather events and severe droughts, which seem to have been particularly frequent in the 1970s, seem to have a similar effect. On January 27th, 1974, 326 dead gulls were counted along 16km of road near Hedgehope. This road mortality must add up to thousands of birds but starvation probably takes a further hidden toll when times get that tough, not only through mortality, but possibly reducing breeding success if the birds are still in poor condition for spring.

It is not going to be easy to work out how to place all of these impacts in context to understand the population crash of Black-billed Gulls in the South Island. Until this happens though, it is going to be difficult to reverse the downward trend and change their threat status. Given the increasing populations of Black-billed Gulls in the Firth of Thames and other sites in the North Island at present, extinction may not be imminent. Even so, it will be a long time before the local colonies will increase enough to change the Black-billed Gull’s current billing as the world’s most endangered gull. Remember this next time they ask you for a chip.

In addition to all the people who have carried out counts for more than 60 years, I need to thank Tony Habraken for sharing his knowledge of the local gull populations and Rachel McClellan and Wynston Cooper for providing information from Southland and discussion on the threats there. In addition the results of census counts were provided by Tony Habraken and Adrian Riegen and the graphs made by Gillian Vaughan