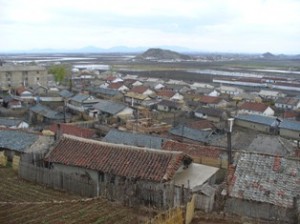 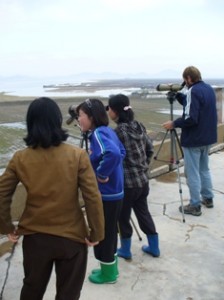 Shorebird researchers from New Zealand have discovered a direct link involving this country, North Korea and the United States. Among flocks of over 5,000 migratory birds near Pyongyang, were godwits from New Zealand, which had stopped there during northward migration to breeding grounds in Alaska. And the discovery was made thanks to Winston Peters.

During a visit to the Democratic Peoples Republic of Korea (DPRK) in November 2007 the former Minister of Foreign Affairs, Winston Peters, discussed with DPRK officials the possibility of a team from the Miranda Naturalists’ Trust (MNT) visiting the country to undertake a survey of migratory shorebirds with Korean scientists.

The survey would emphasise searching for Red Knots (Calidris canutus). These birds annually migrate from New Zealand to Siberia, where they breed, passing somewhere through East Asia on their way. Red Knots must refuel on their journey, probably on the tidal shores of the Yellow Sea, but the exact whereabouts of most of them remains unclear. Most of the suitable coastline of the Yellow Sea has been searched but not the coast of the DPRK. Published data on shorebirds in the DPRK is very limited.

The MNT visit was made with considerable assistance from MFAT, DOC, DPRK/NZ Friendship Society and the Korean Natural Environment Conservation Fund (KEF). It was hoped a visit in April 2008 could be arranged but insufficient time was available to process visa and other documentation needed to visit the militarily sensitive coastline. Clearance did come through in time for a visit in 2009.

A team of three MNT members lead by Chairman, David Lawrie travelled to the DPRK for the last two weeks of April 2009 and along with members of the KEF and two Korean scientists were able to survey a 30km stretch of coast near Mundok, 80 km north of the capital Pyongyang.

The area is known as the Mundok Migratory Bird Wetland Reserve (MMBWR) and was known to hold some shorebirds but data was very limited. It is an important place in winter for ducks, geese and swans.

The survey over several days counted approximately 5,750 shorebirds of 22 species but no Red Knots were found;the tidalflat sediment in the area may not contain the small bivalves favoured by Red Knots.

The most rewarding sightings were the more than thirty colour banded and flagged Bar-tailed Godwit (Limosa lapponica) seen in a flock of 2,200 birds. These birds had been caught and banded in North and South Island NZ, Victoria, southeast Queensland, northwest Australia (Broome) and near Shanghai, China. Details of these birds are still being sought. Several other species with flags from China were seen and a Dunlin (Calidris alpina) with Alaskan bands was also discovered.

The Mundok area was found to hold internationally important numbers of Bar-tailed Godwit and Saunders’s Gull (Saundersilarus saundersi), (a species classed as vulnerable), which was of great interest to the reserve staff as this will help raise awareness with the DPRK government of the importance of this site.

The west coastal plain of the DPRK is under intensive cultivation with rice paddies on the flat land and low rolling hills covered in various vegetable crops, apple orchards and small scattered villages. Thousands of people worked in the fields, with few powered implements, preparing for planting and small fishing boats operated out of most small rivers to fish in the inshore waters of the Yellow Sea. Human pressure of the coastal habitat is considerable with most tidalflat areas being worked over by crab and shell fishermen. Marine worms are also collected.

Ensuring the survival of these vital coastal habitats is challenging all round the Yellow Sea where such a huge human population lives and works. The destruction of Saemangeum in South Korea in 2006 has had a dramatic effect of the populations of several shorebirds species migrating through the Yellow Sea, which only increases the urgent need to protect the important areas that are left such as Mundok. The work the MNT team undertook will help to highlight this need.

The MMBWR staff are seriously under resourced but are enthusiastic and it is hoped the increased awareness generated by the MNT visit will lead to more resources for them in the near future.

The local people were exceptionally friendly and hospitable as were the scientists involved and the KEF staff who are working tirelessly for nature conservation with very limited resources.

The MNT signed a cooperation agreement with the KEF and hope to return to the DPRK in the coming years to continue surveying the coast for migratory shorebirds in the hope of finding the elusive staging site of the Red Knot and other shorebirds passing through the area. The MNT has been undertaking similar voluntary work at Yalu Jiang in China just across the border from DPRK since 2004. 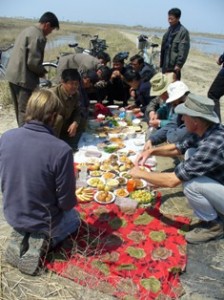